BACK TO BLOG
Inside WITHIN

In our March 3 panel discussion, iOS 14, IDFA, & What It All Means for the Digital Marketing Landscape, WITHIN’s CEO Joe Yakuel was joined by Wunderkind Director of Strategy Jon Humphrey, Rockerbox Co-Founder Ron Jacobson, and WITHIN’s Integrated Media Director Michael Choi for a deep dive into what marketers can expect with the new changes launching this spring.

The privacy-first approach, while ostensibly a win for consumers who want control over their data sharing, will mean a shift in tactics for marketers who want to continue to deliver customized, tailored experiences for users. The panel’s goal was to give attendees some actionable takeaways for how to prepare for the changes.

WITHIN asked attendees to complete a short poll before the discussion began to gauge just how much awareness the audience had of the upcoming changes and their level of preparedness. 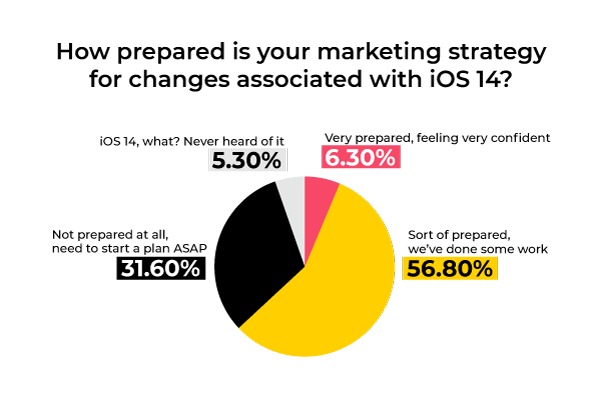 The good news is that over 56% said they are “sort of prepared” for the iOS 14 changes and the bad news is that more than a third of attendees had no plan in place at all. Let’s get into it!

What’s Going to Happen With iOS 14?

Apple intends to give its users control over whether to opt in to data tracking on every app. Up until now, users had the ability to opt out of targeted ads, but this change will mean they must actively opt in via a popup screen for every app. This will cripple advertisers’ access to the IDFA, which is historically how they precisely target and track users within iOS apps.

Choi notes a deeper fallout, however. “This is not just about IDFA or about app tracking,” he says. “Even website-based conversion tracking will be impacted because Apple’s changes make it so that everyone has to play by the same rules.”

There’s a lot to digest about the upcoming changes, so we suggest you carve out some time to view the discussion in its entirety, but here are a few of the highlights and insights from the panel.

Here are some of the anticipated roadblocks the panel called out.

Modeling conversions are not created equal. Google seems to be ahead of Facebook in countering Apple’s changes with modeling data. Facebook is “building the plane as they’re flying it,” says Choi.

If you have apps, saddle up. “It’s pretty obvious that if you have apps, this is going to impact you a lot more,” according to Ron Jacobson. “If you haven’t been planning at all, you should definitely get on that. For mobile web, it’s a bit more nuanced,”

Anticipate some backtracking. “A lot of channels that have been effective won’t perform as well as they have…Campaign creation will have to change a lot as well. You have to start learning to use some of the old techniques that you have in the past … ironic that we’re getting back there,” says Jacobson.

Changes on the horizon will include a shift in established norms. Companies large and small have relied on generating large lookalike audiences in a way that will no longer be possible. “That presents a huge challenge,” says Jonathan Humphrey. “Your source audience has to be larger than it was previously to return the same efficacy.” So, what are some of the panel’s recommendations?

Rediscover your love of first-party data. “You definitely, no matter what, have to keep focusing on capturing first party data,” says Jacobson, who believes that securing audience information while they’re active on your website is a best-case scenario. “There’s some low-hanging fruit that’s worth starting off with. Simple things. That could mean promo codes, post-purchase surveys, email surveys, all these classic things that have been used for a long time are going to become more important.”

He also points to refer-a-friend campaigns and email forwarding campaigns as a way to use your existing audience to help capture more first-party data. Another tip is to make sure that users are getting value in exchange for their info. This can be a place to employ some creativity. Jacobson was surprised and impressed by a vacuum cleaner company’s persuasive offering in exchange for his phone number: an extended warranty on his purchase.

Be fast and adaptable. “We won’t know exactly how these changes impact our performance until the day it happens,” says Choi.

Humphrey notes that the absence of lookalike audiences will present a hurdle, prompting some digital soul-searching. “Are there other means for me to diversify my investments from a retargeting perspective? Now, if maybe Facebook is less attributable than it was before, am I more comfortable investing in less attributable channels over all?”

Keeping an open mind as the data rolls in and being ready and willing to make adjustments will be key.

Test, test, and test some more. “Plan to report on different events,” says Choi. “Right now if you’re able to optimize to purchase event, that’s great but the reality is that we might not have enough signals to optimize there anymore.”

He suggests gathering intel at higher levels, like awareness, traffic, add-to-cart, and website exits. It will be important to have this baseline data as a comparison after the changes occur. “Right now,” Choi emphasizes, “do that testing.”

Jacobson notes that there is no magic bullet. “Nothing is perfect. Attribution isn’t perfect, and measurement isn’t perfect. Never has been.” Needless to say, it’s important to glean what you can from all available sources. “The whole world is coming in a circle. Everything is becoming aggregate.” Ideally, Jacobson says, you will want to collect “enough different signals that you can triangulate in one location to make smart decisions.”

In short, as Jacobson put it, “You’re going to mess up, you’re going to screw up. Just learn from that as fast as you possibly can.”

To hear more advice from the panel and the audience Q&A session, watch the recorded event. A follow-up to this forum is in the works, so please ask any lingering questions you’d like us to cover in the next round.

Sue Cahaly is WITHIN’s Content Marketing Manager. She and her husband live outside of Boston in a house full of kids, dogs and music.