Marginal Metrics: Why You’ve Got CPAs All Wrong

Why would you run a marketing campaign that costs more than the profit it generates? As absurd as it might sound, this situation actually represents one that many marketers unknowingly find themselves in.

Let’s say you’re running all of the marketing for a single-product ecommerce store. The shop makes a $20 profit from each sale before taking into account any marketing spend. Now let’s say that someone pitched you an idea on how you could generate more sales by spending $30 of marketing dollars per sale. Chances are you’d scoff at the idea, right? However, even though marketing campaigns can appear profitable at an aggregate level if the cost per sale is below $20, it doesn’t mean that every sale generated is costing the brand less than $20. That means that even when we’re profiting at an aggregate level, we can still be losing money. To understand why this is the case, we need to understand the idea of marginal metrics.

To see why, let’s use an example. Say you are running a small paid search campaign that’s netting you 10 conversions per day with a $5 CPA. One day, you decide to be more aggressive and increase the volume that you’re generating. Following the bid increases, the company is now generating 30 conversions a day at a $15 CPA. Did you follow that math? If you make $20 per conversion, was increasing your paid search a good move?

But Do the Numbers Add Up? The After-Math of It All

Many marketers would think this is a good move, because they could increase their volume substantially, and keep the CPA safely below the $20 margin. This thinking is a bit misguided, and we’re going to do some math (just a little!) to learn why.

Bucket A. These are the conversions from before the bid increases:10 conversions a day, at a $5 CPA (a total spend of $50 per day).

Bucket B. And here are the conversions that we only got after we increased our bids: 30 of them. Take away the previous 10 and we’re left with 20 conversions a day.

Carrying through those calculations, the marginal CPA of the conversions in Bucket B is $20. So, effectively, each incremental conversion generated after pushing bids cost us an average of $20. 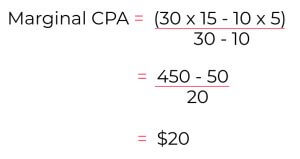 Now that we know our margin per conversion is $20, and the marginal CPA on our bid increases is $20, we can say that increasing our bids really made no difference at all to our bottom line. Each additional conversion generated no more margin than the spend it took to generate that conversion. Increasing our bids may have helped our top line revenue, making it appear as if we made a positive change, but we didn’t actually manage to add profits to our bottom line.

The crucial lesson here is that CPA, despite being an average metric, really doesn’t tell us much. If we want to know whether it makes sense to push or pull spend on a certain channel, we have to look at the marginal CPA on the change to decide.

This logic goes beyond just changing bids. Every paid marketing channel not only has an average CPA, but also a marginal CPA associated with it.

If you’re running Facebook Ads, and generating 100 conversions a day at a $10 average CPA, the marginal CPA on that channel would take into account the amount you’d have to spend to get from 99 conversions to that 100 conversions.

While it’s tempting to think that $10 will do the trick for that 100th conversion, the real answer is likely to be much higher, perhaps somewhere in the region of $20 to $40. (This happens because the more ads you run on a channel, the more saturated the channel becomes, making it harder to get each additional conversion.)

Pulling back spend on one channel means you may have more budget to allocate elsewhere. If you’re wondering how to best stretch marketing dollars across channels, let’s talk.

Performance Branding: The Future of Marketing

07-01-2022
We use cookies on our website to give you the most relevant experience by remembering your preferences and repeat visits. By clicking “Accept”, you consent to the use of ALL the cookies.
Do not sell my personal information.
Cookie SettingsAccept
Manage consent